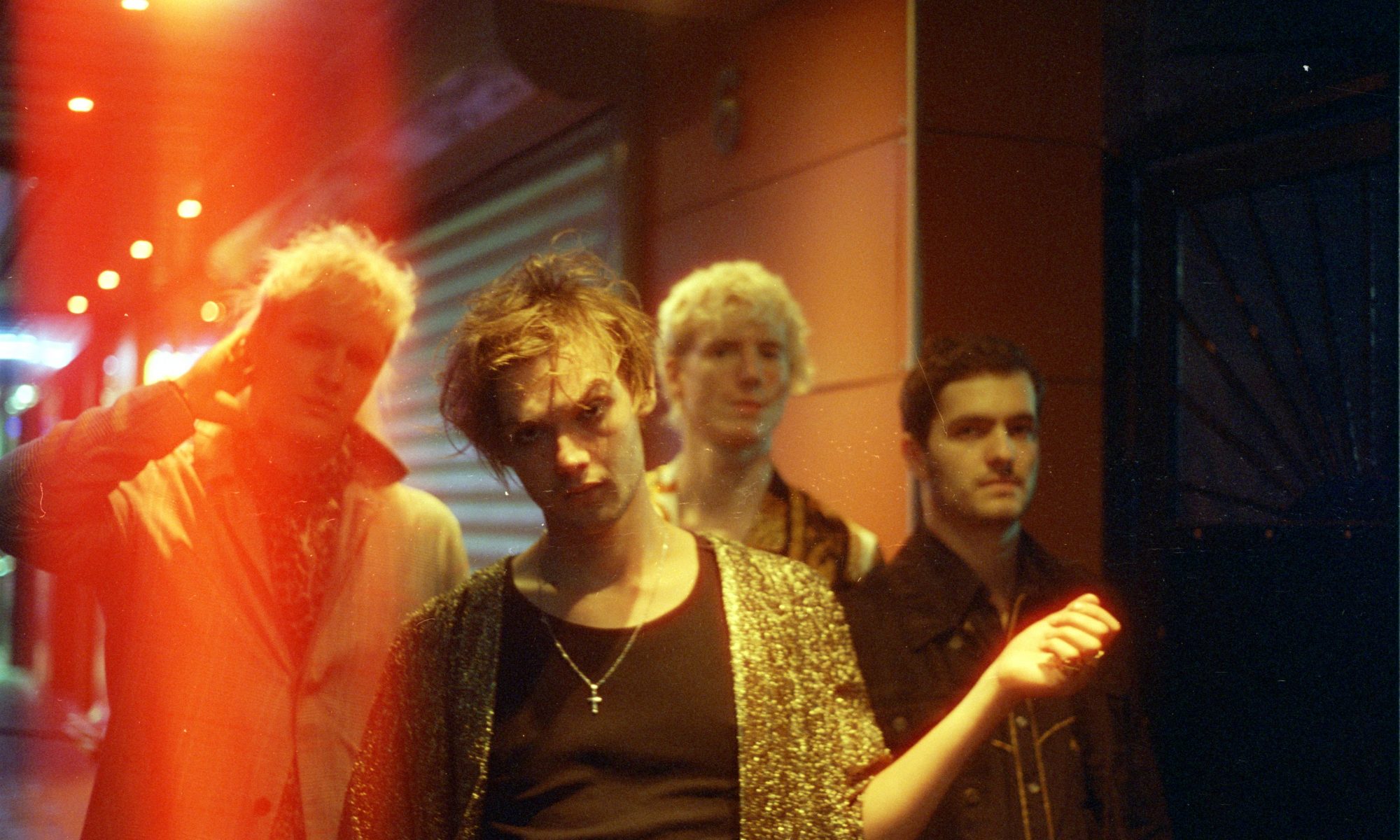 Usually the articles on this blog are written in German. My main focus is on Hamburg’s music scene, so it makes sense for me to write about that in my native tongue. But when Samuel Telford contacted me and introduced his band The Kecks, he did so in English. And I thought: Why not? Let’s give Biggy Pop a little international spin! So I proudly present: my first blog post in English. It’s an interview with The Kecks, an energetic and smart up-and-coming indie rock band, based in Hamburg.

The Kecks just released their single “Modern Girls“ together with a great DIY video, shot at the Molotow music club in St. Pauli. The band members come from different countries — including Lennart Uschmann from Austria (vocals), Samuel Telford from Australia (guitar/backing vocals), Joel Phillips from Doncaster/Sheffield/UK (bass/backing vocals), Kai Weidle from Hamburg (drums) and, until recently, Corentin Neyran from France (drums). I talked to Sam und Joel about forming a band on a Flix bus, their nomadic backgrounds and approach to guitar music, the meaning of their latest single, pressure in the music business, like-minded bands, Hamburg as a pop music city, and rock ’n‘ roll in times of Corona. 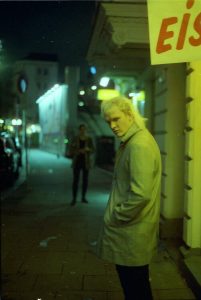 Legend has it that you all met on a Flixbus to Berlin — on your way to see a concert. How exactly did this encounter happen? Did you immediately recognize all the like-minded rock ‘n’ roll people and just start talking?

Sam: Lennart and I were on our way there, and we saw Joel with his fantastic mullet drinking a beer at 10 am and wearing a Beatles shirt. Being an Australian, a spot of day drinking and a mullet draws me in like a moth to a flame! We ended up having a bit of a wild night and getting on really well and when it turned out Joel plays bass, we knew we’d completed our line-up.

The members of your band all come from different countries. How does that influence your approach to music?

Joel: If anything, I think it’s more the nomadic background of us all that actually brings us together. I think it takes a strange kind of person to completely uproot their whole life and take on the adventure of travelling the world chasing your passion. And I think that has given us all a very similar approach to making music.

Right now The Kecks focus on releasing singles rather than a whole album. Is that your fast-living punk attitude talking or the current mechanism of the music streaming business?

Joel: Yeah, I suppose it is that fast-living DIY punk ethic within us that has driven that sort of ethic. Wherever ideas take us, we tend to just strap ourselves in and ride it until the wheels come off. So it’s great to have the creative freedom to just explore everything without having the confines of trying to string a cohesive album together. At some point it would be great for someone to throw a chunk of money at us, so we could lock ourselves away for a month in isolation and completely live that album vibe and life. But for now it suits us to be able to jump from one idea to the next whenever the inspiration takes us.
Sam: It’s definitely something we think fits with the current model of the music business. The way people interact with and consume music changes all the time and staying realistic and working with that just seems to make sense to us. When I find a band I like, I’ll usually go check some live videos and either their most recent or debut album. So yeah, like Joel said, it would be great to have the chance to be in the studio for an extended period and focus on an album. But until that’s happening this way of recording and releasing suits us. 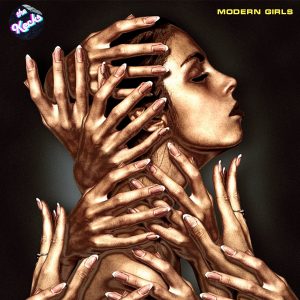 In the video for your latest single “Modern Girls” all the (male) members of The Kecks are transformed into women — and it doesn’t look very pleasant. What’s the idea behind this?

Sam: Yeah, a big part of the song is trying to understand what it’s like for the younger generations to have two lives: their actual life and another constant online life in which perfection and beauty are completely necessary. So this painful transformation was to acknowledge the struggle of people feeling like they are forced to change themselves for their online persona. Because the song dealt with that theme, we wanted it clear that we weren’t just pointing our fingers and saying ‘don’t do that’ or ‘this is wrong’ or anything so judgemental. So we figured the best way to demonstrate empathy was to put ourselves in similar circumstances.

You sing: “Imagine what it feels like”. So: What did it feel like to be put in women’s shoes, clothes and make-up?

Joel: To be honest it’s pretty much the most natural thing in the world for us. We all own bits of “women’s” clothing that we wear regularly and are all partial to a bit eyeliner and lippy — so it was just another day in the office for us.

“All you modern girls / got everything wrapped up in smiles” is another verse of that song. Do you think the pressure on female musicians is higher in the music industry — not only artistically but also regarding their appearance?

Sam: Although that lyric is not specifically about women in the music industry, it could definitely apply. There’s pressure and expectation on everyone in the music industry and in many genres it’s certainly higher for women. I think the musicians and artists we are drawn to (regardless of gender) are those that just flat out reject that notion and do whatever they want — like Cherry Glazerr, Gurr, The Kills, Moses Sumney, Bonavega, and Kirin J Callinan.
Joel: Definitely it’s harder for the women. Everything they do is shoved through a sexualised microscope. It’s kind of creepy to be honest. Things are definitely getting better but we’ve still got a long way to go. It shouldn’t even be a conversation we have to have. All musicians are artists, who gives a shit what is between your legs? It’s purely your art you should be judged upon.

In summer 2019 you released the song “Stick In My Throat“, which has a great indie rock and glam vibe. Where does your fascination for this particular sound come from?

Sam: It’s just that aspect of having fun and being a little over the top for the sake of it. I like to see a band or musician that really just enjoy what they’re doing.

How would you describe the The Kecks’ unique spin on guitar music?

Sam: I’m not sure the guitarist should really answer this — haha. But I think it’s a combination of weird pedals, all of us writing together, and being influenced by classic guitar bands and some less obvious choices. I think my approach is to be some kind of mix between Matt Taylor from the Growlers, Shabaka Hutchings, and the Tekken 1 soundtrack.

Let’s talk about the name of your band: On the one hand, Keck is slang for ‘underpants’, on the other hand it means something like ‘to be about to vomit’. Both — well — interesting meanings. What’s the story behind it?

Sam: I think both meanings really represent how we sound, so it was almost an obvious choice — haha.
Joel: Well, we are pretty pants and our music is generally pretty vomit enducing, so I suppose that’s where it comes from — haha.

The Kecks are based in Hamburg. Does the city, its pop history, and today’s music scene have an impact on your sound and / or situation as a band?

Sam: Yeah, absolutely! Hamburg’s long history of being a trade city and welcoming and working with other cultures has made it such an open, tolerant, and fair city. It’s easy to feel comfortable here and then find other musicians and artists, go see shows and weird events. It’s got everything you need!
Joel: For sure, it’s a place steeped in musical history from The Beatles onwards, and there’s still a cool, punky DIY feel to St. Pauli, Schanze and of course the infamous Reeperbahn; so it definitely has an influence. Places like Molotow and Hafenklang have been super supportive right from the get go and it feels like a really good vibe to call home. Berlin is where all the people who think they are cool tend to congregate, but the cats that are actually cool are in Hamburg. It’s interesting without being pretentious.

You shot the video for “Modern Girls” at St. Pauli’s Molotow music club, close to the Reeperbahn. What’s your special connection to this venue?

Sam: Molotow is just the club for us in Hamburg. It runs such great nights, hosts amazing bands both international and local, and the crew running it are all passionate and creative people. It really is a Hamburg institution and anyone who isn’t already involved in the #MolotowMustStay movement should check it out and get involved!
Joel: The venue is the absolute centre of the universe in terms of music in Hamburg. So many of our favourite bands tour through here regularly like Cherry Glazerr, Temples, The Blinders and Fat White Family, so it’s a constant source of inspiration. You always meet cool like-minded folks and, as I say, from a very early stage they have been super supportive of the band and helped us along with support slots, and they have been absolutely vital to us getting a vibe going. It’s basically our home from home.

We are living in strange times: Are you in any way able to use this exceptional state of the Corona crisis creatively, for example by writing new songs?

Sam: Yeah, for sure. We’re constantly sending voice recordings and demos to one another – I think at any given time there are about five songs in the works.
Joel: Weirdly it’s actually been pretty positive for us. It’s probably the most prolific song-writing period we’ve had as a band and all these weird feelings and emotions we are all experiencing are a great source of inspiration. It slowed things down a little as Lennart actually got locked down in Austria for a few weeks visiting home when they closed the borders, and with no way of getting back into the country. But now we are back to full strength and really on a good vibe. 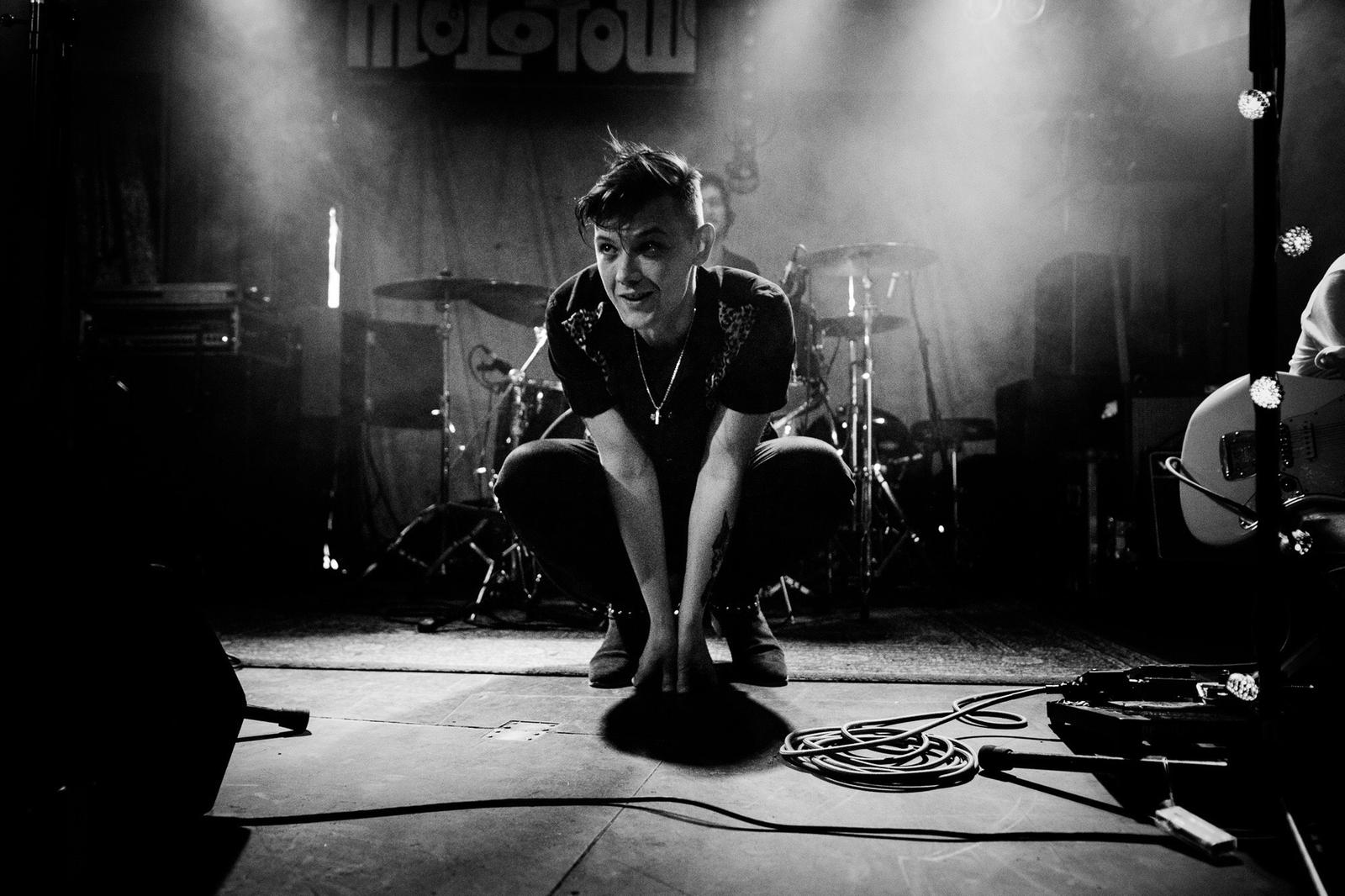 We all miss the wonderful sweaty, messy, loud, live music feeling. What do you recommend to fight the craving for good old rock ’n’ roll while staying at home?

Sam: Turn all your lights off, spill some beer on your floor, play Iggy and the Stooges as loud as you can, and dance like a maniac.
Joel: King Gizzard and The Wizzard Lizzard were just Streaming a live concert “Chunky Shrapnel” which was an absolute trip! Unbelievable live band, so I’d encourage anyone to give that one a whirl! You can also watch back our live set from Molotow over on Facebook and YouTube, if you feel the need to give your ears a good beating for half an hour! TURN IT UP LOUD!